The Current State of the Dairy Sector: Main Problems and Steps to Address Them
posted 26 May 2022 15:35

On 18 May 2022, the first session of expert discussions on the topic “The Current State of the Dairy Sector: Main Problems and Steps to Address Them” to support and promote dairy export during the war was held.

First Deputy Minister of Agrarian Policy and Food of Ukraine Taras Vysotskyi, Deputy Head of the State Service of Ukraine on Food Safety and Consumer Protection Olga Schevchenko, Head of the Union of Dairy Enterprises of Ukraine Vadym Chagarovskyi and leading analyst of the analytical agency INFAGRO Maksym Fastieiev spoke at the event.

According to Taras Vysotskyi, the government have not limited dairy export, while for other product categories there is an export ban or export licensing. The Ministry is confident that the dairy sector can be profitable – it can satisfy both the domestic demand and dairy export. Thus, the dairy producers can plan their long-term export activities. The good news is green corridors at the border for two product groups – fuel and agricultural products.

Olga Schevchenko highlighted that a transit possibility via the EU is a relevant issue for exporters. Today the businesses have the right to export their products to the third countries in transit through the EU countries. The only requirement is having a transit certificate which certifies compliance with animal health requirements.

Transit through the EU can now be in two ways. The first way is in containers properly sealed and certified by the SSUFSCP inspectors for the third countries. In this way the products are transited without transhipment and delivered to the destination countries with a relevant certificate.

Meanwhile, according to Olga Schevchenko, there is still a high level of trust to the Ukrainian products in the EU. It is confirmed by the fact that even during the war three more dairy enterprises have been included in the list of food exporters to the EU.

In addition, during the event Vadym Chagarovskyi outlined the current problems of the dairy sector, which include increase in the dairy production costs, reduction in the number of consumers on the domestic market, loss of produced dairy products in the occupied territories and in a war zone, problems with settlements on the part of retail chains, lack of effective lending tools for dairy processing enterprises for the wartime, freezing the state support programs for dairy producers and processors for the wartime by the Ukrainian government. The logistical problems include: absence of sea connections, lack of shipping containers in the Baltic region, lack of fuel, foreign carriers do not allow road transport to the cities which are shelled from time to time, the cost of road transportation has grown by more than 40-60% (for instance, Kazakhstan via Moldova, Romania, Turkey). The financial problems include: traders’ refusal to work on a prepaid basis (it is proposed to introduce payment with government bonds), lack of working capital to fulfil export orders, large stocks in warehouses accumulated in March-April. Among the problems related to veterinary and customs control are complicated border crossing and/or low border crossing capacity on the Ukrainian-Romanian and Ukrainian-Polish borders, uncoordinated scheme of re-issuing veterinary and customs documents in the EU countries and Turkey at transhipment from vehicles to containers.

According to the INFAGRO’s calculations, the level of self-sustainability of the dairy market will exceed 100% in 2022 (with a 115% peak in Q2), which means that under the current difficult condition there is need for support to the sector due to limited import and facilitating export opportunities for the operators.

According to the INFAGRO’s preliminary forecasts, there can be about 500 thousand tons of milk left for the export needs in 2022, that is 17% of the total proposal of raw milk for industrial processing. Today there are some developments in renewing the export, but the indicators are still far from those in previous years. The main problem is logistics. The majority of shipped goods are exported directly to the EU or Moldova. We are still experiencing huge problems with transit of our dairy products to the traditional importers via the EU.

For all the event materials, including speakers’ presentations, analytical bulletin and SSUFSCP infographics see here.

You are welcome to join the next expert discussion on the topic “Export Logistics of Ukrainian Dairy Products” which will be held on 1 June. Follow the event announcements on the websites of INFAGRO and State Enterprise “Export and Entrepreneurship Promotion Office”.

This event was organized together with the State Enterprise “Export and Entrepreneurship Promotion Office” and analytical agency INFAGRO with support of Switzerland in the frame of the Swiss-Ukrainian Project “Higher Value Added Trade from the Organic and Dairy Sector in Ukraine” implemented by the Research Institute of Organic Agriculture (FiBL, Switzerland) in partnership with SAFOSO AG (Switzerland) www.qftp.org. 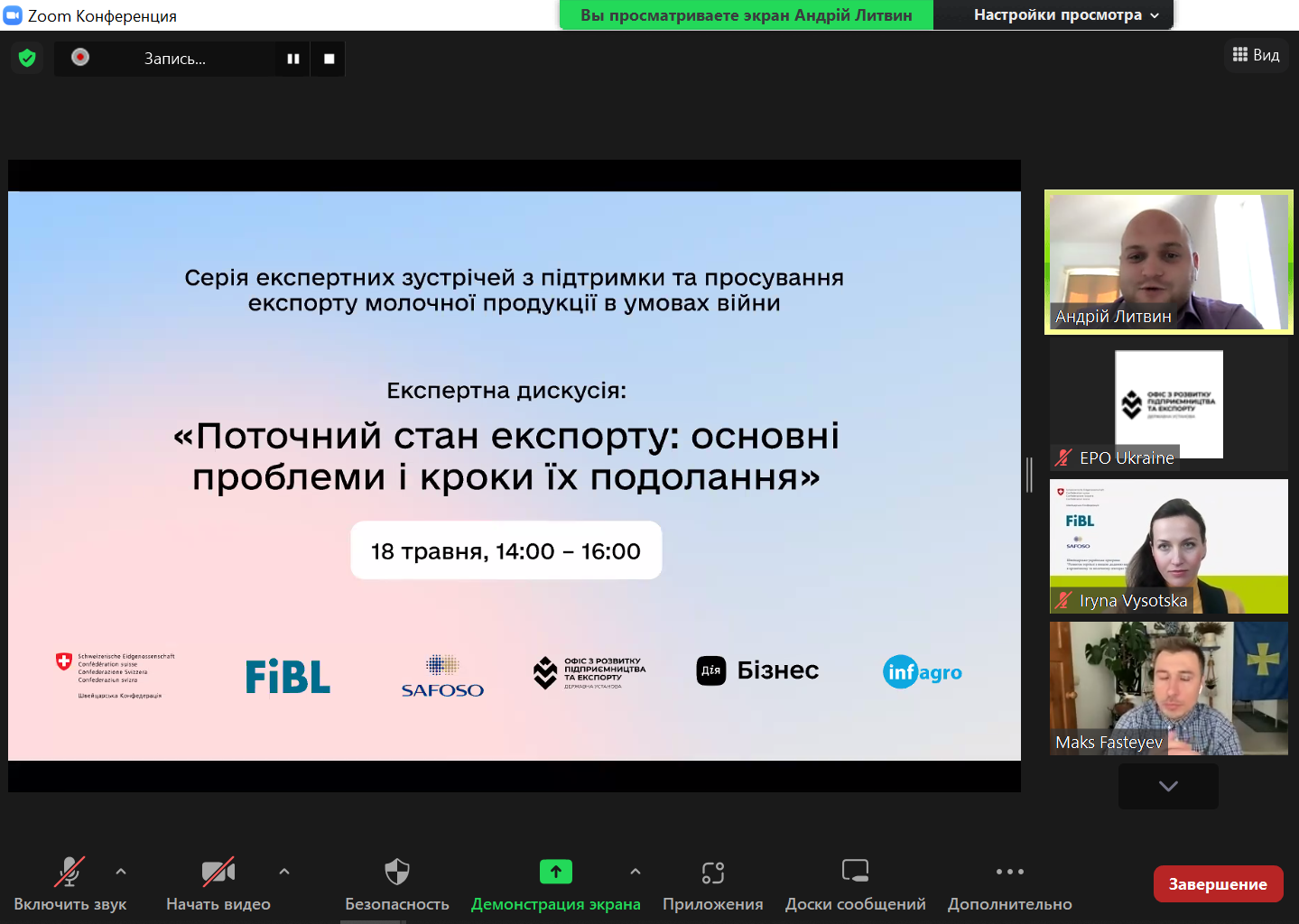 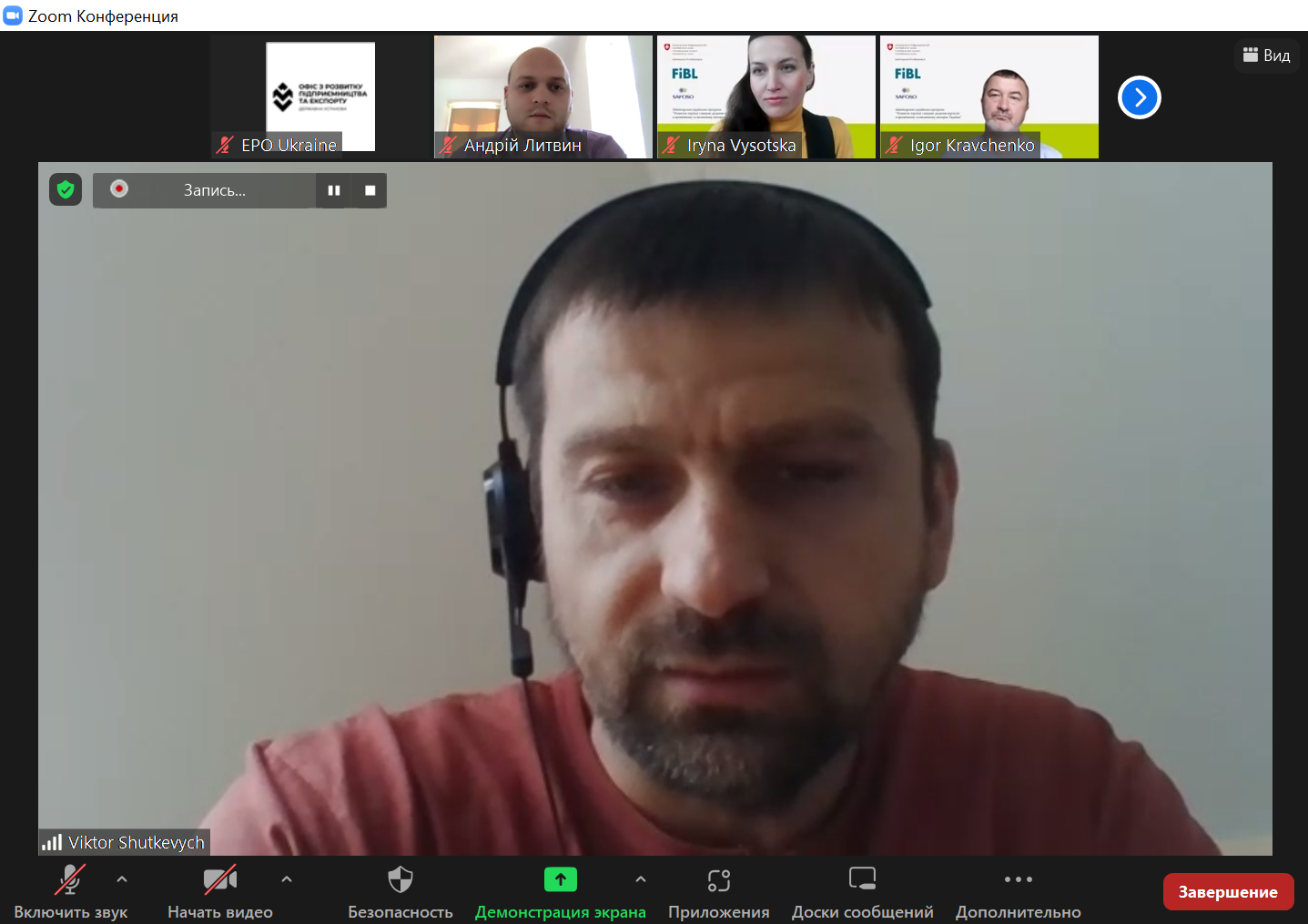 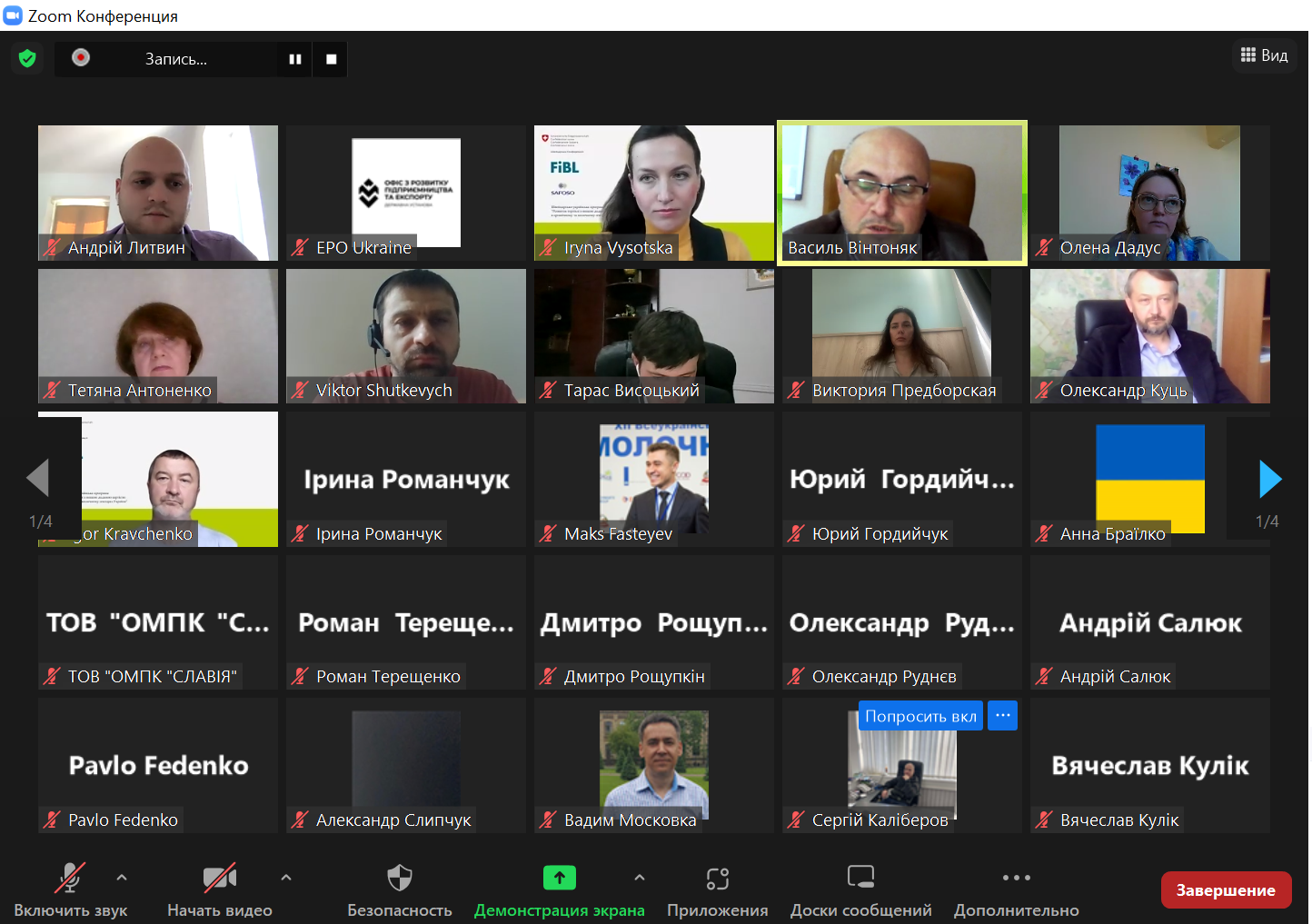 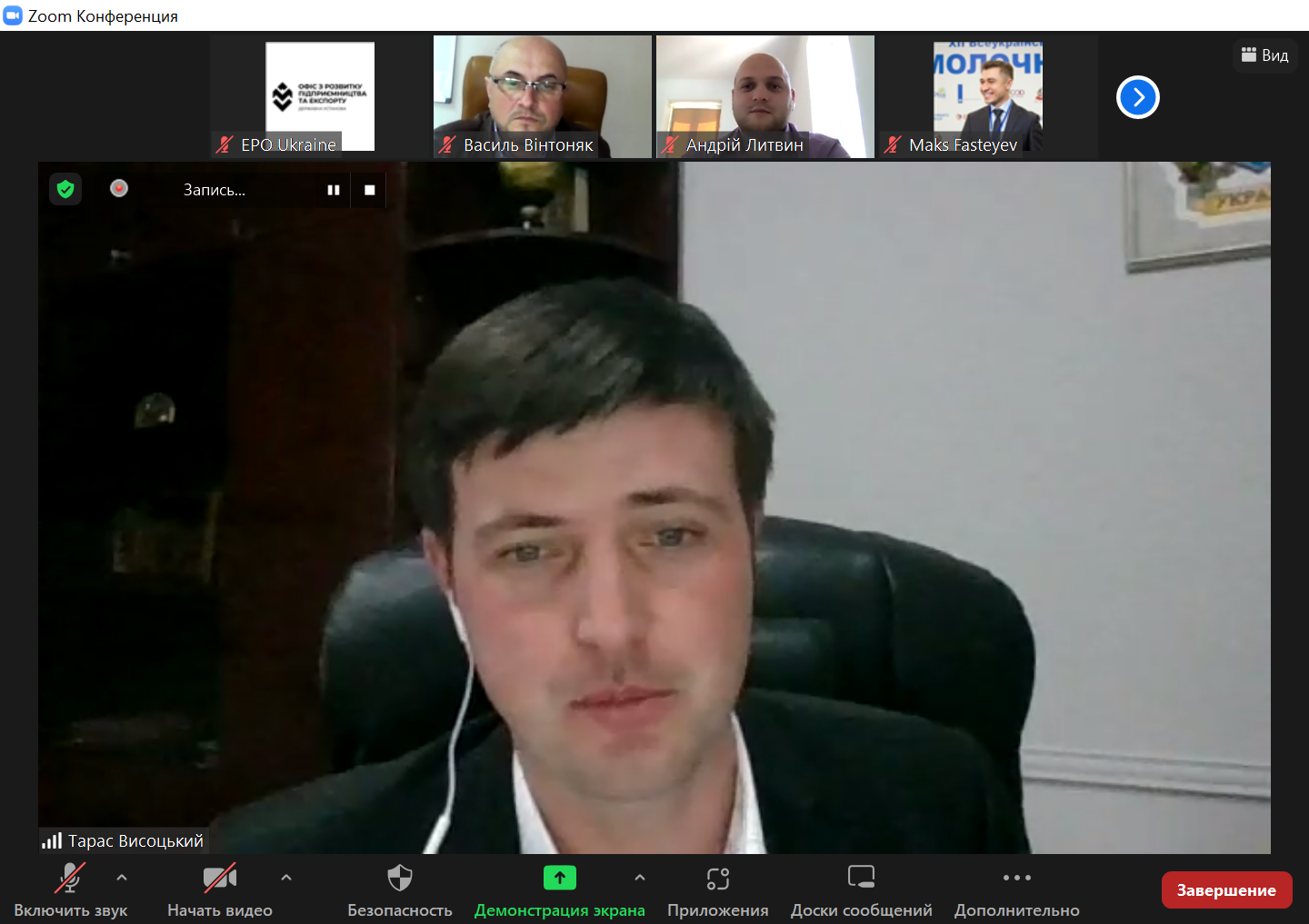 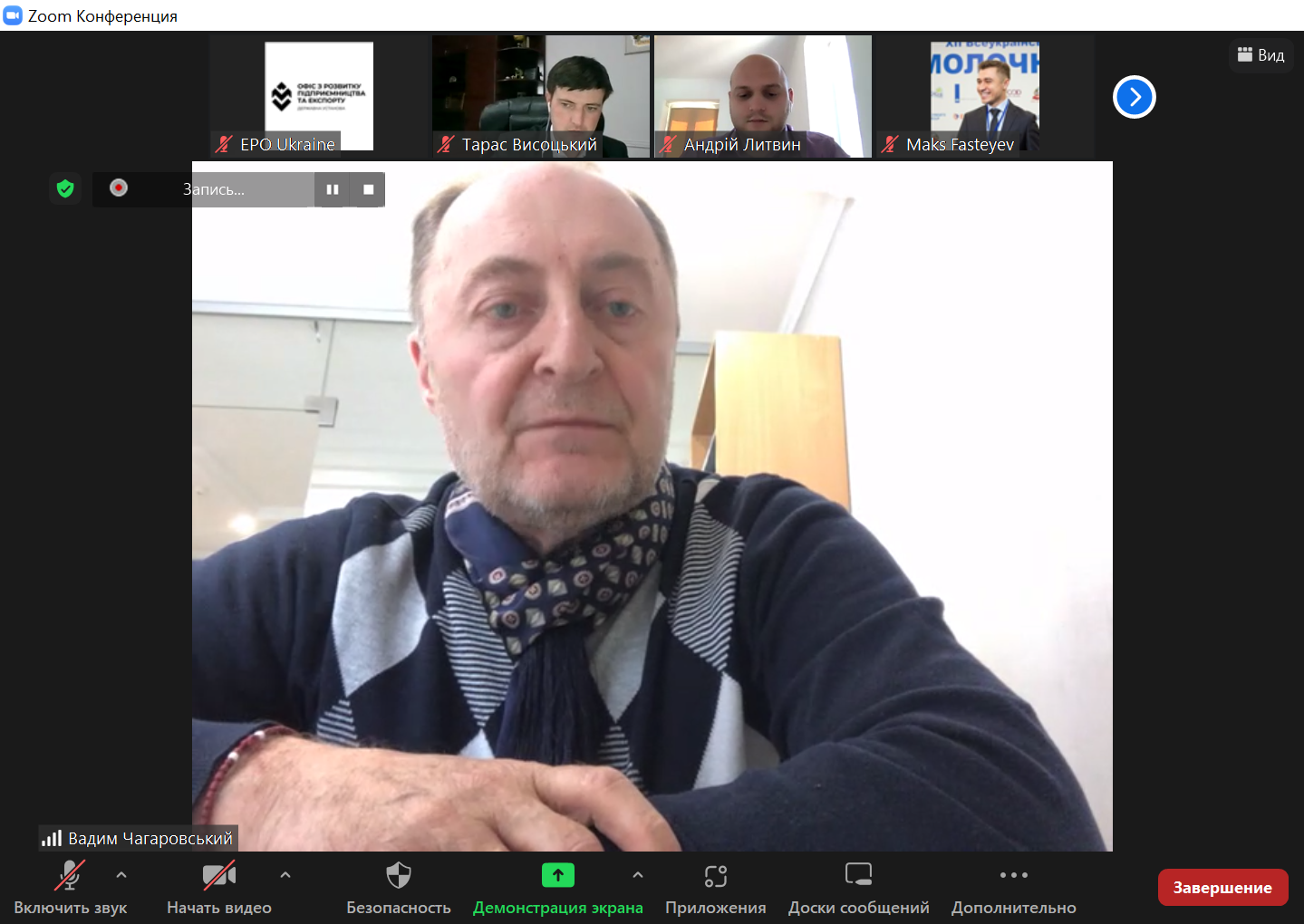 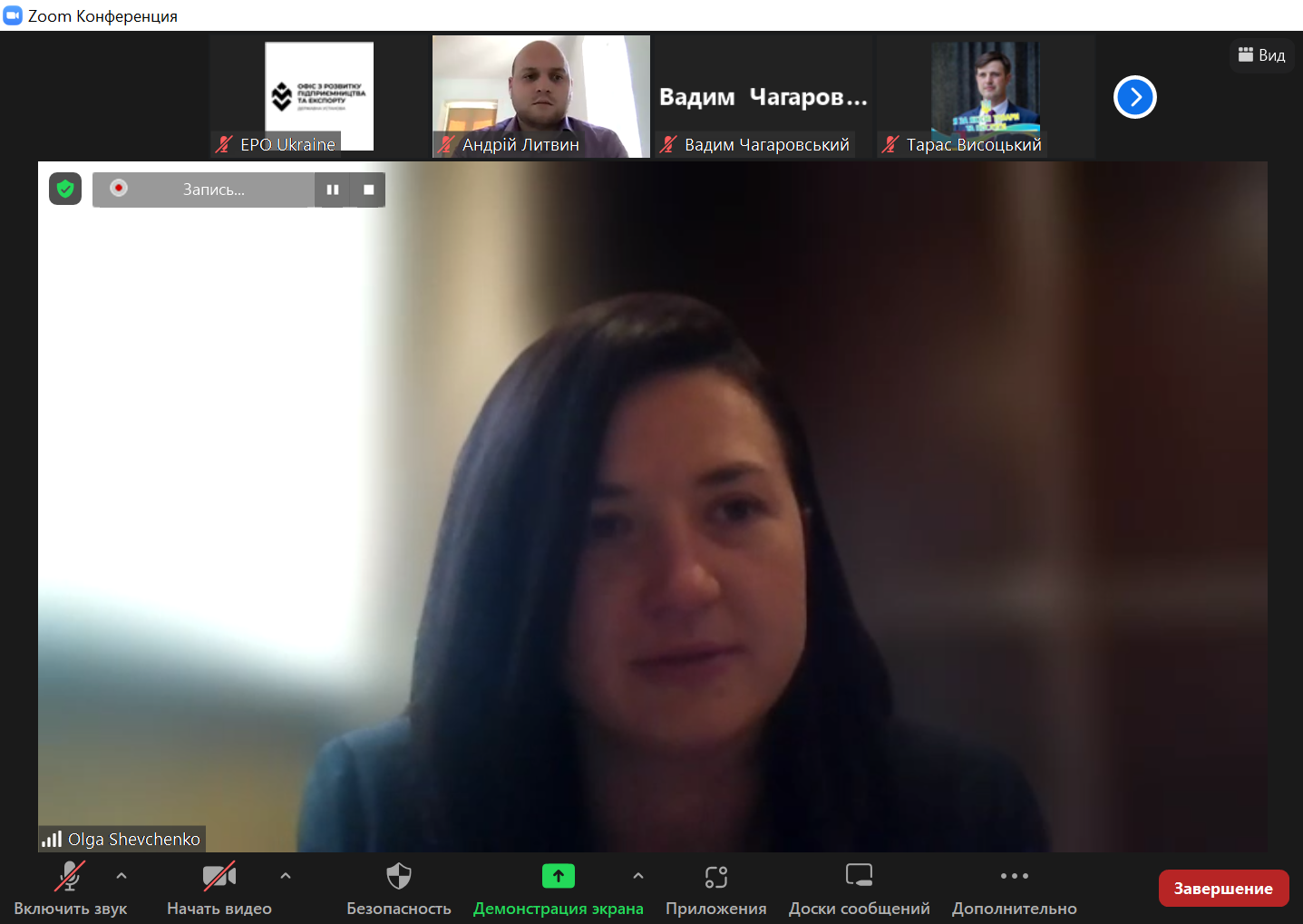